Wine growers on a mission of good taste 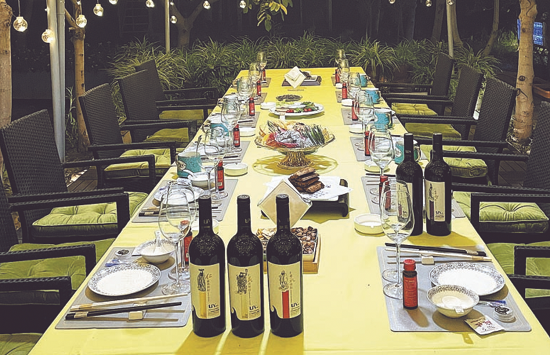 The moonlight poured onto a dining table placed in a vineyard where roasted lamb was offered with good wines. Diners sipped the beverage, chatted and enjoyed a "symphony" performed by nearby, but unseen, insects and animals.

The splendid evening was provided to travelers in mid-September by Li Xueren at his winery in Yinchuan, capital city of Northwest China's Ningxia Hui autonomous region.

From summer to autumn, Li's winery accommodates visitors from across the country who are interested in wine culture and socializing under the stars. As the number of travelers has grown in recent years, Li plans to expand the size of the dining area and increase the number of beds available to visitors.

Li's winery is one of 116 such establishments dotted along the Helan Mountains, which wind through Ningxia, a rising star on the world's wine map. It is recognized as a "gold belt" for its high-quality grapes and wines, thanks to its mild temperature, humidity, water and soil. Now Ningxia is building its wine region at the eastern foothills of the Helan Mountains into a tourism destination where one of the major attractions will be good wine.

According to the Culture and Tourism Department of Ningxia, wineries in the area attract more than 1.2 million visitors every year. About 50 wineries can offer services like accommodation, wine tasting and dining, as well as a comprehensive wine culture experience.

Li's winery is close to Yinchuan, about a 20-minute drive from downtown. Facing a lake in a city park, the boutique winery is beautifully designed with a vineyard and a three-story building that houses the owner's art collection, displays his fine wine, and honors his family members and traditional culture.

"I love traditional culture. Why not to express it through the design of wine bottles. People know the wine is produced in China when they see the bottles," says the vintner, who founded Li's Vineyard in 2013.

Visitors can also feel the owner's love for traditional culture through his art collection in the museum-like building, where ink paintings, calligraphy works, traditional Chinese furniture and exquisite pottery pieces are exhibited. Li also loves to collect items that represent the changes in society over the decades, such as phones, TVs and radios produced in different years.

Apart from these collections, wine tasting and grape picking, there's a tent area for visitors to gaze at the luminous stars, a popular activity in Ningxia, where the vast Gobi Desert has been transformed into green land or vineyards, making it a perfect destination to study the night sky.

"I hope my guests come here to enjoy more than wine. I want to give them a comprehensive experience," Li says. 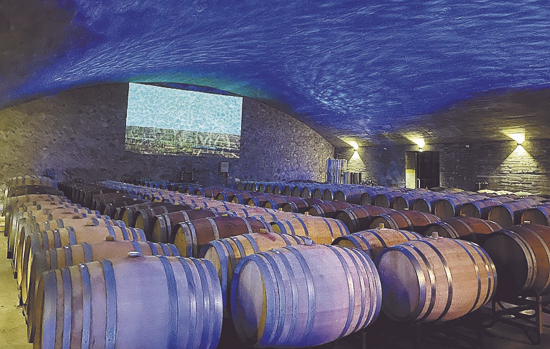 The wine cellar in Jade Vineyard has a ceiling covered by a video projection of a blue ocean. [PHOTO BY DENG ZHANGYU/CHINA DAILY]

Different from Li's winery that has walls to separate it from the city's other buildings, the Jade Vineyard facing the Helan Mountains is like an art museum in the wild.

The white stone building stands out against the gray rock mountains. It is a popular backdrop for snapshots and has become a top destination in recent years. Inside, there's a concert hall in the fermentation workshop, the first of its kind in a vineyard in China, and a wine cellar underground with a ceiling covered by the video projection of a blue ocean.

Ding Jian, owner of the vineyard, explains that producing wines is like making art. "Music is the audio art and painting is visual art," she says. "For me, wine is the art of taste. Wine matches perfectly with music, painting and nature."

In 2013, Ding left Beijing and devoted herself to the vineyard in Ningxia, which covers an area of about 21.46 hectares and produces 90,000 bottles of wine annually.

"When I first stood on the wild land, I fell in love with it. It is beautiful and gorgeous," says Ding, whose aim was to build an international-level vineyard.

To set up a scientific management system, Ding built a weather station in the vineyard and applied customized planting methods for different grape varieties. In less than 10 years, Ding's wine was winning international prizes.

At the top of the vineyard's white building stands a spacious hall, where visitors can chat, taste wine, play the piano and enjoy a magnificent view of the Helan Mountains.

A large balcony on the top floor gives visitors a panoramic view of the wild surroundings. Rolling mountain ranges stand tall at the front and rows of vines spread out from the left and right.

"It's the best place to see the Buddha face-shaped mountain range," says Ding.

She adds that when the building was designed, the architects regarded it as part of a photo frame. This ensured that any viewpoint from within the building frames the mountains perfectly.

Ding appreciates the mountains so much that she painted them onto canvas and turned the picture into the signature label for her wine.

Next to the white building, a small hotel is under construction to meet the growing tourism demand.

"Lots of visitors say that it's a pity they can't spend the night here," says Ding. 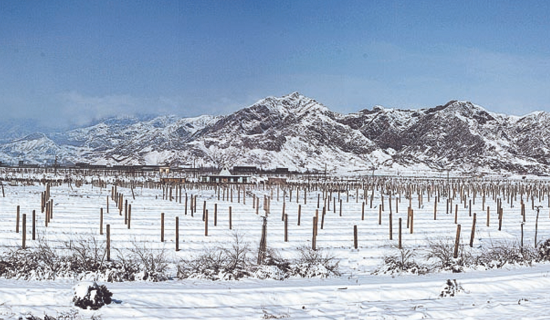 The Helan Mountains provide a dazzling background to rows of vines at Helan Qingxue Vineyard. [Photo provided to China Daily]

Despite the stunning scenery in the region, the wine is the main draw. This is epitomized by the Helan Qingxue Vineyard, which was thrust onto the world stage when its Jiabeilan series won the International Trophy at the Decanter World Wine Awards in 2011, the world's largest wine competition.

Established in 2005, the vineyard sat on a vast stretch of saline soil and success was difficult at first. After years of cultivation, and the help of experts from universities, it was finally able to produce high-quality wine.

"We have spent lots of time and money on technology for cultivating and fermentation. Quality is our top priority," Zhang, one of the few female winemakers in the region, says.

The name of the boutique vineyard is derived from a scene made famous several hundred years ago. Qingxue refers to snowcapped Helan Mountains dazzling brilliantly under the summer sun. However, with climate change, such a scene is impossible to witness in the summer.

"In winter, it's also beautiful," says Zhang, standing in front of the fermentation equipment. Not far away, rows of vines with purple ripe grapes sweep down toward the Helan Mountains.

Although Helan Qingxue offers no dining or hotel service, groups of visitors drive to the vineyard from Yinchuan city, to sample its wine. 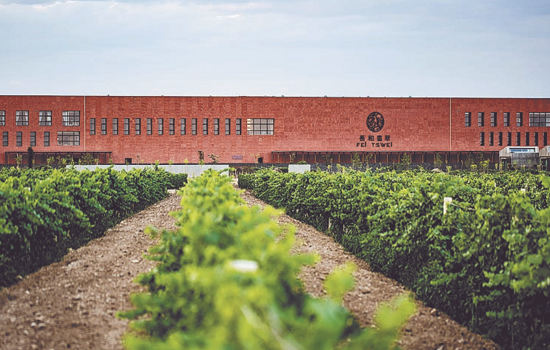 Fei Tswei Winery is located between a reservoir and the southern tip of the Helan Mountain range. [Photo provided to China Daily]

Zhang Yanli, owner of the Fei Tswei Winery, located on the southern tip of the Helan Mountain range, tasted Helan Qingxue's wine in 2012 in Hong Kong and decided to set up a winery in Ningxia.

Before that, she and her husband were offered a mature winery in France with an ancient castle. After visiting France and Ningxia, Zhang Yanli decided to build a new vineyard in Ningxia.

"The French winery was very mature; we just had to buy it and follow its recipe. The land in Ningxia was just an empty plot with nothing on it, but I could paint what I wanted on it. It would be my palette. I made the right decision," recalls Zhang Yanli.

The 93-hectare winery is located between a reservoir and the mountains. Flowers and carefully trimmed trees surround the red building, bordering a large garden.

Zhang Yanli loves to try different grape varieties on the soil and waits year after year for the fruit. Mixed with different fermentation technologies, the varieties that emerge are just like "giving birth to babies", she says.

"After picking and processing the grapes, and putting the wine into oak barrels, we have to wait for a whole year to sample the final result. Different wines have their own characteristics, like babies. The process is very interesting," she says.

The owner actively promotes her wine in Hong Kong and thus her winery attracts many visitors from there. Zhang Yanli's dream is like all the other vintners — to one day make wine in Ningxia that drinkers around the world know and admire.

"Vineyards in the region are very young. We need time to mature, and I firmly believe that, together, we will make it one day," she says.

Just an hour's drive away from Fei Tswei Winery, a wine resort town, Dulaan, is under construction. With hotels, theaters and other forms of entertainment, the town is planned to open in July next year. The hope is that it will attract more than 100,000 high-end tourists every year.

The area around Helan Mountains, thanks to the efforts by the people tending vineyards or specializing in running wineries, may one day be viewed, in wine terms, as a place of good taste.