On October 28, the United Nations in China held a reception in Beijing to commemorate the 77th United Nations Day. H.E. Siddharth Chatterjee, the UN Resident Coordinator in China, presided over the event. Mr. Ma Zhaoxu, Chinese Vice Foreign Minister, and Mr. Lin Songtian, President of the Chinese People's Association for Friendship with Foreign Countries, were invited to attend the reception. Two-hundred guests, including diplomatic envoys in China from 110 countries and representatives of relevant government departments, social organizations and companies, also attended the event. 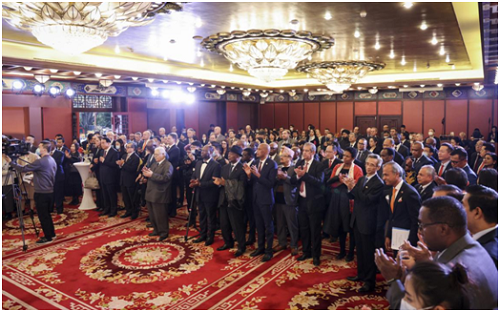 Wines from the East Foothills of Helan Mountain of Ningxia were chosen for the event by the organizer. The Foreign Affairs Office of Ningxia, together with the Administrative Committee of Ningxia (East Foothills of Helan Mountain) Wine Industry Park, selected 10 dry red wines from Helanhong Winery, Domaine Charme, Chateau Vegani, Chateau Luoshan, Yuanshi Vineyard, Li's Winery, Chateau Baoshi, Sunshine Winery, Copower Jade Winery Fei Tswei and Chateau H.Y.R.H., and 3 dry white wines from Jade Vineyard, Chateau Mihope and Domaine Monluxe to be presented collectively on the "UN dinner table". The stunning display of wines from Ningxia became a highlight of the event. 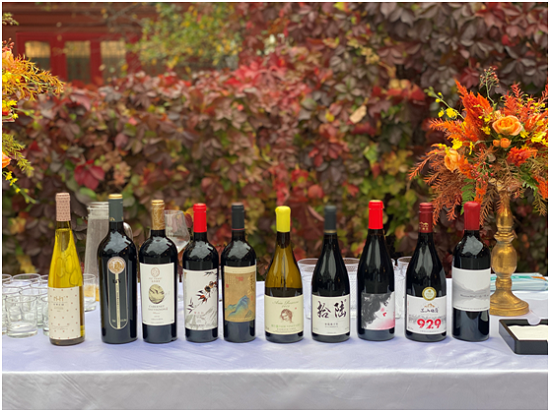 The selection of wine from Ningxia [Photo provided to seeningxia.com]

H.E. Siddharth Chatterjee, the Resident Coordinator, spoke highly of the quality of wine from the East Foothill of Helan Mountain and expressed his sincere gratitude to Ningxia for supporting the activities held by the United Nations in China. President Lin Songtian added, "After generations of hard work, people in Ningxia have revitalized the Gobi Desert, which had remained dormant for many years, and they are creating 'A Marvel of the World' with a wine industry worth billions. Ningxia's wine industry is literally a 'purple miracle', which has become a unique agent connecting Ningxia to the world." The attention of diplomatic envoys and guests from all sectors was drawn to the brilliant array of Ningxia wines. H.E. Bishnu Pukar Shrestha, Ambassador of Nepal to China, noted, "The quality wines from the East Foothills of Helan Mountain are superb, and are comparable to many world-renowned wines. When I visited Ningxia last month, I tasted a number of excellent wines and brought back many for my friends and relatives, and they all enjoyed the wines very much. I would like to advocate for Ningxia wines to make them better-known. I look forward to more amazing achievements of Ningxia wines." 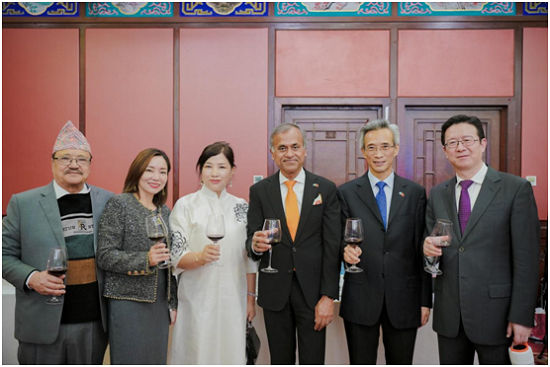 The group photo of the event [Photo provided to seeningxia.com]

The East Foothills of Helan Mountain in Ningxia are recognized by the sector as one of the best places in the world for planting wine grapes and producing high-end wines. Ningxia's wine industry started in 1984, and was identified as a National Geographical Indication Product Protection Zone in 2003. In 2021, two national platforms, namely the Ningxia National Open Development Comprehensive Pilot Zone for the Grape and Wine Industry and the China (Ningxia) International Wine Culture and Tourism Expo, were approved and settled in Ningxia, marking that the development of Ningxia's wine industry having reached the national level.

The CPC Ningxia Committee ranks the wine industry at the top of six specialty industries, and has set the goal of building a "world wine capital". Ningxia is the largest viticulture area in China, accounting for 1/3 of the national planting area. By 2021, Ningxia wine grape planting bases have reached a cumulative area of 525,000 mu, with an annual output of 130 million bottles of wine, accounting for 37.3% of the total domestic wine production. The comprehensive output value of the wine industry reached 30 billion yuan (about $4.1 billion).

Currently there are 228 estates in Ningxia, and over 60 wineries have won more than 1,100 awards in international wine competitions, such as the Decanter World Wine Awards, Concours Mondial Bruxelles, and the Berlin Wine Trophy, accounting for more than 60% of the total number of awards nationwide. The wines produced in Ningxia have been exported to more than 40 countries and regions, and have become the "purple card" of Ningxia. In 2022, Wine from the East Foothills of Helan Mountain reached a brand value of 30.11 billion yuan, ranking No.9 in the regional brands list of national geographical indication products.