Serving world with a toast by Ningxia 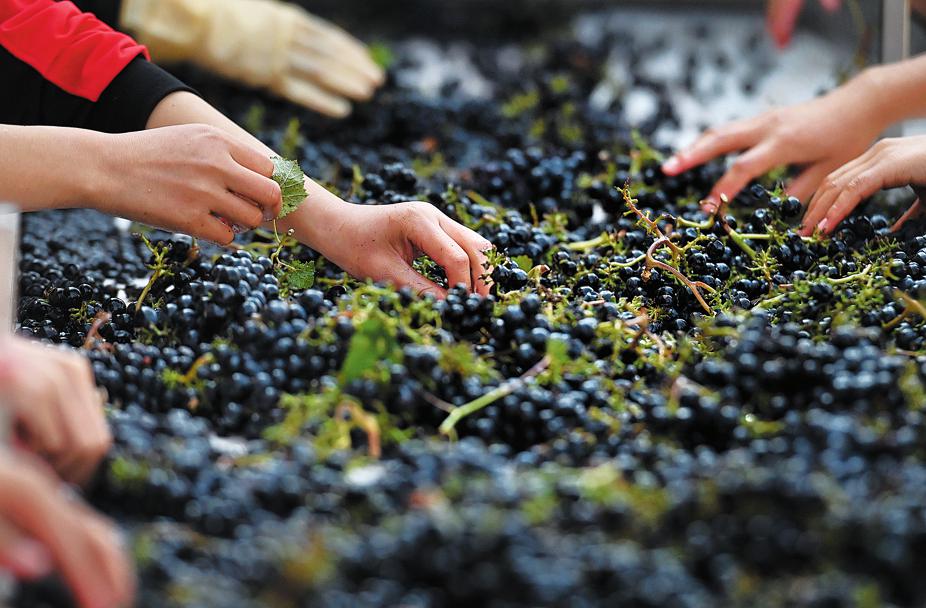 As the afternoon sun cast shadows between rows of lush green grapevines, white and sandy roads wound through pastoral vineyards and connected the various wineries while the towering Helan Mountains overlook the scene.

Welcome to the heart of China's fine wine region.

About two hours by plane from Beijing, the Ningxia Hui autonomous region is home to nearly 200 wine producers which go under the appellation of the Helan Mountain Eastern Foothills. Known for its desolate desert and ancient tomb sites, Ningxia is now being talked about as a wine area that brews fine vintages winning acclaim around the world.

The region first came to be known as the "Bordeaux in China" for the predominance of Bordeaux varieties. But the local government and winemakers have the ambition to make it into a world-class fine wine region, with distinct characteristics which can rival the Bordeaux region.

"We are not 'China's Bordeaux' or 'China's Napa Valley'. We want to be ourselves. We must have the confidence to combine our rich and distinguishing cultural connotation with wines and build our own winery industry system with the terroir of Ningxia as the core," said Zhao Yongqing, executive vice-chairman of the autonomous region.

The arid and gravelly soil, dry climate with little rain and abundant sunlight, large temperature ranges between night and day, and an altitude above 1,000 meters is the terroir that meets the requirements for growing top-quality wine grapes.

The Chinese government has made wine making one of the nine pillar industries for high-quality growth of the local economy and has provided extensive support to the region, including technical training and infrastructure support.

The local government in 2013 introduced a classification system, grading wineries into five quality tiers, and they are reassessed every two years. So far, 57 vineyards along the Helan Mountain Eastern Foothills have been recognized by the system.

Currently, Ningxia has 550,000 mu (36,667 hectares) of vineyards, accounting for one-quarter of the country's total. It produces 130 million bottles of wine annually, which won nearly 1,000 international prizes over the past few years.

The State Council gave the green light in May for the establishment of a comprehensive experimental zone for developing and opening-up the wine industry in Ningxia. The pilot zone is the first of its kind set up in China for wine production.

The ambitious plan is to build another 550,000 mu of vineyards in the next five to 10 years and by then produce more than 300 million bottles of wine annually and log sales of 100 billion yuan ($15.48 billion). By 2035, the zone is expected to have 1.5 million mu of vineyards with annual production of over 600 million bottles of wine, a scale similar to that of the Bordeaux area in Europe.

The huge potential has attracted ambitious winemakers and marketing people who work hard to make their region well known.

"To make top quality wines, we must make full use of the terroir of Ningxia. We have the best grapes, which are the most important raw material for making wine, and the wine-making techniques should respect the characteristics of the grapes and minimize man-made intervention," said Yu Huiming, vice-president of Xixia King Winery, the oldest winery in Ningxia. Yu was one of the oenologists who made the first bottle of wine in Ningxia.

Emma Gao, owner of Silver Heights, agreed. "The terroir of Ningxia cannot be copied. The wines we produce should also be unique and not industrialized," Gao said.

Silver Heights has about 1,000 mu of vineyards and produced 200,000 bottles of wine last year. The Financial Times' Jancis Robinson, a respected British wine critic, has lauded its wines. Its flagship product Emma's Reserve, a 100 percent Cabernet Sauvignon, is priced at around 400 pounds ($540.2) a magnum.

Gao is now trying biodynamic practices on her vineyard. Biodynamic wine is made with a set of farming practices that view the vineyard as one solid organism and create a self-sustaining system. Chemical fertilizers and pesticides are forbidden. Animals, such as ducks, horses and sheep, live on the soil and fertilize it.

Gao, who practices Tai Chi, often shares her understanding of the traditional Chinese culture when recommending her wines to foreign buyers. "It works very well and they love it," said Gao.

Gao is also constantly looking for a signature grape to give Ningxia wine a point of difference. The main grape varieties in Ningxia include Cabernet Sauvignon, Cabernet Franc, Pinot Noir and Chardonnay. Gao is now cultivating Nebbiolo, Grenache Noir and Malbec.

For Ding Jian, owner of Jade Vineyard, wine is not just a product. It is culture. Ding's abstract paintings are hung on the clean white walls of the winery. Guests can enjoy piano recitals in the hall and listen to a handpan show in the underground wine cellar.

In August, Ding posted a notice to hire volunteers to pick grapes in her vineyard. In less than one week, she received more than 300 applications.

"That was far above our expectations. In the end, we had to do phone interviews with them. It was really difficult for us to choose the most suitable ones," Ding said.

The applicants, aged between 20 and 60, came from various industries, ranging from hotels, to IT and finance, in tier-one and tier-two cities around the country.

"By inviting them to my vineyard, we can hear various, but honest views about us," Ding said.

"China's wine industry is developing very fast. If they can participate and get involved in the operation of a vineyard, they would better understand and promote the growth of the domestic wine industry. They are the seeds of the future," Ding added.

To further increase the prestige of Ningxia wines around the world, fresh efforts were launched to promote wine tourism. The local government recently unveiled 10 travel routes centering on the wineries during the China (Ningxia) International Wine Culture and Tourism Festival. The routes combine wine tours with scenic spots and restaurants and hotels.

"It will be win-win to both wineries and other tourism operators," said Zheng Zichao, owner of Woerfeng Estate, a four-year-old vineyard. To the west of his farm, a travel complex with chic hotels, restaurants and art centers is being constructed.