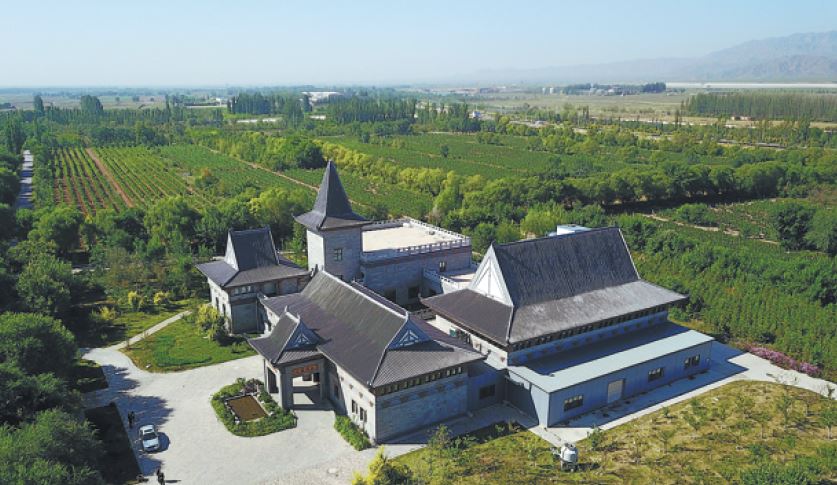 A vineyard sits around a grassland in Ningxia. [Photo provided to China Daily]

Alongside Yuanshi Vineyard at Helan Mountains' east foothill in Ningxia Hui autonomous region, there is a 10-kilometer-long stone wall. Inside it, besides the 133-hectares of vines, there are plenty of fruit trees and animals such as rabbits, chickens and peacocks.

Thirty years ago, the place was all Gobi desert.

It took the Yuan family three generations of effort to build this green land－a 400-hectare abandoned sand quarry was turned into a green space surrounded by over 500-hectares of windbreaks which are still expanding.

Yuan Yuan, 28, general manager of the vineyard, aims to bring a Chinese-style wine to the world and attract global tourists to visit their Chinese garden-style winery on the basis of her father and grandfather's work. In the 1950s, Yuan Yuan's grandfather, Yuan Fumin moved from Anhui province to Ningxia. After reform and opening-up, he quit his job as a driver and founded a sand quarry in 1980s. The business earned Yuan Fumin a tidy sum in earnings.

Yuan Yuan remembers when she was in elementary school, when the sandstorms came through the air and whole sky would turn yellow.

Yuan Yuan's father Yuan Hui, decided to carry out environmental governance on the sand quarry and began planting trees in 1996.

It was hard at first－in the first few years the survival rate of the trees was under 50 percent.

"The wind on Gobi can dry out the saplings overnight. I could only see a couple of green spots 20 years ago," Yuan Yuan recalls.

Yuan Hui never gave up. He invested the earnings from the sand quarry and even borrowed money to continue planting trees.

Little by little, the green spots connected together, and the windbreaks gradually appeared.

He tried to grow fruit trees and grain on the Gobi but the earnings were low because of the wind and many stones.

In 2006, the Ningxia government encouraged the region to develop a wine industry. Yuan Hui planted 13.3-hectares of grape vines with his own hands the next year.

Grapes were a perfect match for the soil. A year later, he started to design and build his own winery.

It took Yuan Hui six years to build the Chinese garden-style winery. All the materials used were from waste stone in the sand quarry－the main building was a stone architecture and the ground was constructed with abandoned firebricks, even dead trees were used.

Yuan Hui believed that good wine comes from good grapes. To ensure the quality of the grapes, in 2014, Yuan decided to shovel away the 100-hectares of vines that had already been fruiting and cooperate with agricultural professors to plant new grape species.

"Besides the architecture, all the winemaking facilities inside were updated by my father who wanted to make better wines," Yuan Yuan says.

In 2015, when Yuan Yuan graduated from Sun Yat-sen University majoring in tourism management, she came back to Ningxia and took over the vineyard from her father, becoming the youngest head among the wineries in Helan Mountain's east foothill production area.